The Grand Encampment Museum preserves and interprets the history of Wyoming at the Upper North Platte Valley. It provides the public with access to historical sources and experiences, as well as a place for research and to educate all generations.

Copper mining, ranching, and timber industry history are central themes to the history of the Encampment area.  Exhibits on these industries, as well as items from domestic life and western culture are on exhibit at the GEM.

The Lora Webb Nichols collection is 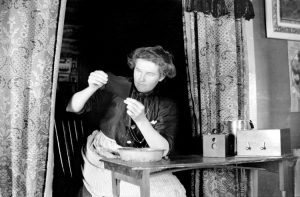 one of the most intriguing housed at the GEM. Lora was an avid photographer and collector of photographs. Thanks to Lora, we know what Encampment and the Platte Valley looked like during the boom days. She chronicled the lives of women, children, miners, ranchers and more.  As a result of her passion, she took and collected over 20,000 photos. We are beginning to understand this collection as one of the largest, turn of the 20th century photo collections in the West!

We host weddings!  The GEM has a variety of unique historic settings for your ceremony. Call the museum director to discuss your idea and rates.

The GEM started as a volunteer effort with support from the earlier families: Oldman and Parkison certainly, but also from others including such names as Herring, Platt, Vyvey- Verplancke, Kraft, Peryam, Wolfard, Kuntzman, and on and on. Even today the museum operates primarily with volunteer labor as the hub during the copper boom and since. And like the spokes of a wheel the story spreads from mining to timbering and agriculture. (Moulton, Candy. The Grand Encampment. Glendo, Wyoming: High Plains Press, 1997.)